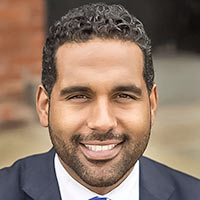 Dennis Bradley was first elected to represent the 23rd Senate District (Bridgeport) in 2018.

As a state senator, education and ensuring our justice system is fair and equitable are two of his legislative passions. Sen. Bradley is an attorney at Bradley, Denkovich & Karayiannis (BDK) Law Group, a civil litigation and personal injury law firm. Passionate about education, Sen. Bradley served as chairman on the Bridgeport Board of Education from 2015 to 2019.

Prior to his time as chairman of the Park City’s Board of Ed., Sen. Bradley worked alongside Congressman Jim Himes (D-Connecticut) as a campaign associate in 2008 and 2010. For his exceptional work in the community, Sen. Bradley has been awarded the Public Service Pro Bono Award and the St. Thomas Award.

Sen. Bradley earned his B.S., at Norwich University in 2009 and a J.D from UMass-Dartmouth in 2013. He lives in Bridgeport and enjoys reading. 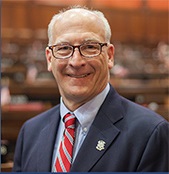 Phil Young is the state representative for Stratford’s 120th District.

While serving on the Stratford Town Council, Phil served as Majority Leader and was a consistent advocate for fiscal responsibility.

Phil is a past director of the Connecticut Citizen’s Action Group, working on consumer and environmental issues. He was also a director in the Storrs based CT Public Interest Research Group.

In order to right a wrong, Phil sued Stratford’s Mayor, and won, causing the town-wide vote on the Water Pollution Control plant issue.

Born in Cleveland, Ohio, Phil has lived in Connecticut for 37 years. He has been a member of the Stratford Democratic Town Committee, and is a proud Stratford resident with his wife Jen. Phil is a career chef, well known for his cooking and business management of the Bridge House in Devon. 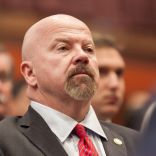 Born and raised in Stratford, Joe attended Holy Name Elementary, Wooster Middle and Stratford High School. After obtaining a Bachelor of Science degree in environmental science from Central Connecticut State University, Joe worked as a weather forecaster at Western Connecticut State University before catching the news bug and beginning a career in radio news. He had a successful career as a radio news reporter/anchor at WICC/WEBE, winning many Associated Press awards and twice the Ellen Abrams award for best radio reporter in the state.

After working in the City of Bridgeport administration managing all media relations and public affairs functions including the police and fire departments, Joe served as the deputy chief of staff for the State of Connecticut House Speaker.

He returned to the city of Bridgeport and currently works on green initiatives ranging from energy efficiency and renewable energy to urban forestation and sustainable growth.

Joe annually volunteers at the Housatonic River clean-up and is a member of Protect Your Environment (PYE), the Stratford Rotary and the Lordship Fathers Club. He is also an auxiliary member of the local VFW Post 9460 and was also a lector at Holy Name of Jesus Church.

Joe is fighting for Stratford interests at the State Capitol, including assisting in the securing of funding for the renovation of Stratford High School, the grant for the improvements at the South End Community Center and playscape, the funding for the Sterling House upgrades and the Connecticut Air and Space Museum at Sikorsky Memorial Airport. He is honored to be representing the district held by his good friend, Terry Backer, until his passing in late 2015.